[Trigger Warning: history and images of restraint and restraint related abuse. If you would like to view this post with the images redacted, please see the image-less version.]

Wanderers- people with Mental Health or Developmental Disabilities who “wander” off. The most common image of a wanderer is an older adult with dementia. I know that- before her health failed- my great grandmother ended up in a locked ward at a nursing home- the “wanderer’s ward.”

A little more relevantly, a number of Autistics are or were wanderers, myself included.

One afternoon when I was in 1st grade, a teacher’s aide called my mother to let her know that she had some concerns. I wasn’t making it into the class room- I would get off the bus and wander around the school yard, looking at all the little things that exist in yards on a warm fall day. If I *did* make it into the class I would end up wandering the halls when the teacher would send me to the speech room. This was in addition to other in class things, too. At this point, my mother demanded that they have an aide escort me from the bus to the class, and my “services” began. This was a year before Asperger’s would be added to the DSM IV.

The reason I bring this up now is because the CDC put in their recommendations for the ICD-9-CM (International Classification of Diseases, Ninth Revision, Clinical Modification; the US government’s official system of assigning codes to medical diagnoses and procedures). In this, they included a recommendation for a diagnostic code for “wandering” behaviors. (Here is the Complete PDF of the CDC’s recommendations.)

Here’s the problem- having it listed as a diagnosis/diagnostic code doesn’t add anything to the situation to make the constructive steps they outline happen. What it does is create an excuse or justification for things like restraints. Wandering behavior sure has in the past.

Cage on display in lobby of Peoria State Hospital. Sign above the cage reads, "Utica Crib, once hailed as a triumph of the human care of the mentally ill, a woman was confined to this crib for fourteen years in an Illinois institution. Twenty-six of these abominations were used in Illinois state hospitals. This kind of restraint was banned in 1905."

The Utica Crib was developed at the New York State Lunatic Asylum in the  19th century. It was based on a French design, but the Utica Crib incorporated the slats. It was used to keep people who might get up and wander around at night in bed. This would allow a smaller staff, or even enable another problem- having other patients do a percentage of the care work. This issue was more prominent at Developmental Centers, where those deemed as “higher-functioning” were enlisted as unpaid care-laborers.

Patients tied to bed with leather straps -- a medieval method still in general use. Photo by A. Stettner. 1947

Bed Straps were Used in a similar fashion. The patient would be tied to the bed, to limit movement and prevent wandering. In some cases, the individual might be strapped down in the daytime hours as well as at night. 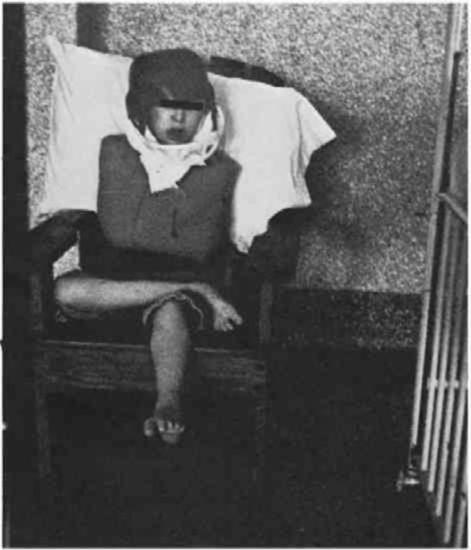 from Christmas in Purgatory, 1974; original caption: "Perfected and modified according to circumstances, chains gave way (during the early nineteenth century) to a long series of other ingenuous contrivances, all designed to limit the patient's freedom of movement. According to Oegg, restraining devices were generally thought to be as necessary for the preservation of life as eating, drinking, etc." Emil Kraepelin

This is one of several images of individuals being tied to chairs or Benches from A Christmas In Purgatory, a famous Photo-essay/expose on the conditions of those with Developmental Disabilities in an institution from the early 70’s. (Here’s A child Bound to a bench with hands tied and a nude woman tied to a bench next to several other women.)

This was another method frequently used to restrict wandering behaviors. The patient was tied around the waist to a lead on a bench in a matter that would keep them from getting off the bench. in some cases, additional restraints were used. In the above photograph, the individual wears a restraining jacket, and propped up with a pillow- which would further restrict the amount of movement the lead would allow.

Restraints that further restrain movement can lead to a number of issues, including bed sores and staph (and in more recent times, MRSA) infections.

I researched the local Developmental center’s history when I was in high school, and it required firsthand sources. In interviewing several people who grew up in the surrounding community and spent time on the grounds (usually because a parent worked there), I heard a lot.

The more mild stories were of people with leads tied to outdoor benches, giving them a 5 foot range in which they could wander. Some of the more frightening ones involved peering in a door window as a small child, to see an individual tied to a chair, urine stains on their pants and pooling underneath. When my interviewee had asked what had happened, one of the staff members had replied that he kept “elopeing” and that he still had a couple of hours left in the chair. She remembered hearing him crying to be allowed to use the restroom. This would have been in the 1960s.

Reforms have happened in the recent past. But Abuses still happen, people are still restrained, and bed restraints of various sorts are still used on night time wanderers. Presenting a code for this behavior just adds one more thing to legitimize some very damaging approaches to people who have a long history of abuse.

It isn’t some distant fringe that advocates restraints. In researching this post, I cam across repeated examples of this. Modern versions of the Utica Bed, but now made with mesh and external zippers, marketed to parents of children who wander. In 2005, the FDA had to issue an alert on Vail Beds because of safety hazards.

Older Adults with dementia are put in “Gerichairs”- geriatric wheelchairs that bind the user to the chair, too often in a way that prevents the user from unbinding themselves. While they can be useful tools for those who need the physical support, when used as a restraint tool it can be dangerous. Bedsores and other infections are common remarks on the use of these chairs. (An FDA statement on improper use of geriatric equipment.)

These abuses are not only in our past. Pretending otherwise just endangers people. I strongly believe that the implementation of a wandering diagnostic code would only add a justification to a group of people who already invoke their own personal difficulties as reasons for abusive behavior.

(Please Sign ASAN’s petition against the Implementation of this abuse enabling code. You can read more about it at the above link.)