I don’t have any great topic to talk about that I’m up for assembling today, so I’m going to write a bit about some of the household appliances that are important in my life, and ones that are helping me live a better life.

Last weekend, my Oster Kitchen Center (which is a stand mixer that can change out parts to be a food processor, or a blender, or…) died. Specifically, the motor burned out.  This mixer has been an important part of my life for the past few years, and I have a strong emotional attachment to it. It was the perfect mixer- two bowl sizes, including a huge one, set so that it can mix even the smallest amounts of egg in the bottom. Able to handle dough and meringue, it was a great treasure for me, a dear friend.

The Oster came from my mother for my birthday a few years ago. She’d gotten it from a yard sale barely used- the woman’s grandmother had given it to her for her wedding 20 years before and it had mainly sat in a cupboard for most of that time as the woman wasn’t a wiz in the kitchen. My mom picked it up for something like $30; a good mixer with a dough-tolerant motor today is several hundred dollars, and that’s without the attachments. (Turns out that kitchenaide considers making bread for your family once a week is “commercial level of use” according to the reviewers who have reached out to their customer service on the more recent models.)

I formed a strong emotional attachment to the Oster. It was a friend to me. Just seeing it in the kitchen and knowing I’d be using it over the weekend would give me a smiling feeling. They say  that autistics might form “inappropriate” emotional attachments to objects but not people. I say it depends on the objects and the people- if the people in your life don’t know you well or don’t accept you but your object is predictable, then of course you will have stronger attachments to objects than people. I have a number of decent people in my life who try to get me that I have an attachment to, but there are also objects that are my “friends,” that I have bonded to emotionally.

The Oster and I were making meringues all last weekend. We were practicing them- my mother is gluten free, and I wanted to try using meringues for her birthday on the 27th. (Happy 50th birthday to my mom, BTW.) And then Monday I started on our final product: cute lids for the custard pies that would spell out “50” over two pies. On the second custard of 4, the mixer stopped halfway through adding the air to the egg whites. I tried the breaker box. I tried unplugging and plugging back in. I even tested the outlet. But it was the Oster’s Motor. 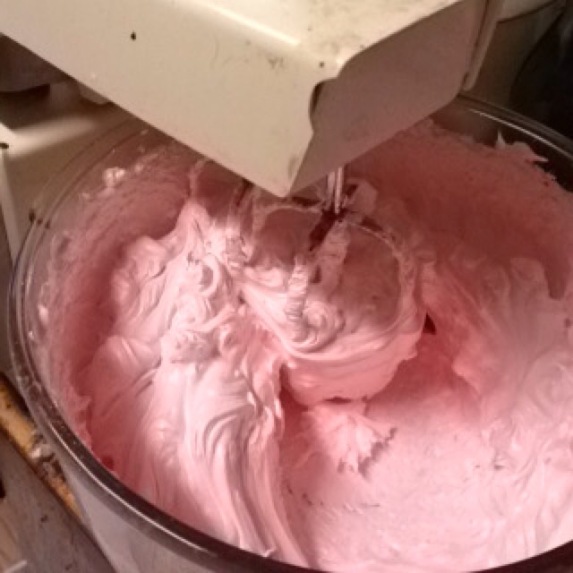 I was devastated. I kept on with making the pies without the meringue, but I kept crying any time I stopped for more than a few seconds. I’m still grieving the Oster, if I’m honest, but a lot of people don’t understand that. The next day my mother let me borrow her standing mixer, but it’s not the same. the beaters don’t reach the bottom of the bowl so you can’t let it take care of things while it beats stuff. it’s harder to add things to. It’s just not the same as the Oster. And it’s not built for the level of baking I use to sooth myself.

I love baking. I love the experimenting and the building of it. I enjoy testing and developing my skills, and the Oster let me do that at a level that matched me. I might only bake on the weekends barring special occasions, but I bake a LOT on those weekends. I make my own bread, I make cakes, I make pies, I try new techniques. Now… I don’t know. It’s more economical for me to get a bread machine and a mid range mixer than a mixer that can handle bread dough regularly. I’m wary though. It will never replace the Oster for me. It won’t be the same. My heart is sick just searching. (And that doesn’t add in the food processor, which I’ll also need to replace since I use it. I have another blender, though.) Rest in machine heaven, my friend. I miss you every time I step into the kitchen.

The other appliance I’m going to talk about today is my Panda Washer/spin dryer.

I currently live in a second floor apartment. My joints and balance are screwy, so I walk with a cane so that when I fatigue I don’t turn my knees or ankles. I can’t carry large objects up and down the stairs very well or very consistently. Since there’s no laundry in my apartment, I’d also need a way to get laundry to and from my place to the laundromat.

Realistically this meant paying my brother to do laundry for me when it was convenient for him. He tries hard, but I couldn’t exactly be sure I’d have enough clean clothes to get me through if I had to travel. I’d periodically end up having to do laundry in my bathtub, let the laundry drip dry inside of the shower curtains, and hang the laundry all over my place. While not a huge deal to have the laundry hanging around, sometimes for a week before being dry, it’s hard to do laundry by hand.

Then a little apartment washer came through my social media feed. While a little bit pricier than I typically spend on things, it was a small fraction of the cost of a full sized washer, and it had a spin dryer. I ended up talking to my payee person and had him arrange things so I could have enough spending money the next month to purchase one.

My model is a Panda Small Compact Portable Washing Machine (6-7lbs Capacity) with Spin Dryer.  It’s more work than your typical washer but it’s a life saver. Here are the steps I follow:

It is a lot of steps, but it’s a thousand times better than hand washing everything and now that my laundry is caught up, I have less of a stressor. It also is helpful for autistic reasons. I can wear literally the same dress every other day and have it be clean, instead of buying two of the same dress on sale. I can wear exactly whichever of my clothes I want when I want.

If you have easy access to a regular washer/dryer, you probably won’t understand the sheer relief I have right now. (You should probably keep with those if you have access to them- the amount of work involved can be overwhelming for people used to modern washer/dryers.) It is amazing.

The down side is that I can’t wash my blankets in it. It’s not big enough for the spinner to fit the whole blankets. But it can handle individual sheets and all of my towels, and all of my dresses that can be washed in a washer. Another issue is that the drainage hose can seep a little, but it’s not enough to be a huge issue- I just have a towel there that I change out periodically and it’s fine, but buying a washer mat would also work.

You also need to keep a dish towel nearby to wipe down the lid and control panel in between tub fulls. I don’t actually count this as a downside, but some people might. The reason is that the control panel needs to be kept dry.  I had a week where the spinner timer was on the fritz because it got wet, but as soon as it dried out it was as good as new.

I also run a whites or empty cycle with bleach once a week to keep it clean and mold free. I let them soak overnight in the bleach.

So that’s the Panda washer. It has really helped me with my stress levels by making one major task less overwhelming and less unpredictable.

Follow Cracked Mirror in Shalott on WordPress.com
Join 2,846 other subscribers